The following piece concerning the Riel Rebellion, entitled ‘The Meanderings of Sergt. Brown’

is taken from the History of the 12th Regiment, York Rangers: ‘Among the members of the 12th, there was none on (and more often off) the strength who saw more than Staff-Sergt. Brown. Originally picked to go with the contingent he was deemed medically unfit and on his way to the station was ordered by Capt. Thompson to fall to the rear. He obeyed, but smuggled aboard the train and after various vicissitudes and making himself useful in various capacities he reached Winnipeg. Here he got himself attached to the Brigade Staff, from April 13th to the 30th, when he rejoined the battalion at Fort Qu’Appelle. Here for a time his presence was ignored, but on May 11th, he was made sergeant of a guard of twelve men, one corporal, and one mounted soldier. This guard was kept on duty for forty-eight hours without relief and then without sleep compelled to undergo the march that began on May 13th, with the result that three men of the guard collapsed. On May 20th, Brown was again taken off the strength and attached to the Supply Officer in Humboldt, a quaint inebriate familiarly known as “Micky Free.” In this capacity he remained at Humboldt, enjoying the festivities that celebrated the Queen’s birthday, and making the highest score in the battalion’s rifle match, until hearing on June 30th that a telegram had arrived to hold the troops in readiness for home he applied for leave of absence. Under leave, Brown proceeded as far as Regina, where by the favour of an acquaintance in the North West Mounted Police, he was permitted to see Louis Riel marching up and down taking exercise in the jail paddock and carrying a ball and chain in his arms. His picture of Riel, jotted down at the time is not that of the shifty and loquacious demagogue he was sometimes painted: “Riel is a big burly fellow and stands about five feet ten inches high; very broad shouldered; 190 pounds; dark complexion, black long hair and beard; high cheek bones and very large nose. With a down and sullen look; very polite to guards, and looked like a farm labourer returning from work without a coat on.” Having accomplished what no other of the 12th for all their marching succeeded in doing, namely, having a look at the Rebel Leader, Brown got back to Qu’Appelle in time to see the York-Simcoes march in, which they did, having adhered throughout the distance from Humboldt to Qu’Appelle to the Body Guard and earned from Col. Dension the name “Foot Cavalry”.’ Sergeant Brown was ‘afterwards an officer in the 12th, Capt. of No. 6 Company, Junior Major, retiring in 1911, with rank of Lieut.-Col.’ His name appears on the roll of the York and Simcoe Provincial Battalion for the North West Canada Medal without clasp. 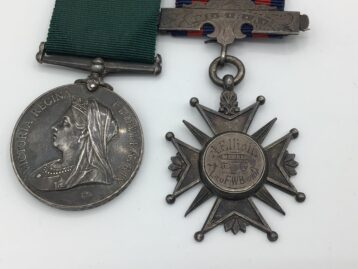