Theobald Burke was born in Cheltenham on 25 March 1833, one of the six sons of William Burke of Knocknagur of the ancient Galway family, the Burkes of Glynsk. The Glynsk branch of the family were descended from William the Conqueror.

He entered the 88th Regiment as an Ensign on 15 March 1855 and was advanced to Lieutenant in August the same year. With the regiment he served in the Crimea War, serving at the siege of Sebastopol  and the final attack on the Redan, 8 September 1855.

He then served in the suppression of the Indian Mutiny, 1857-58, serving in the operations at Cawnpore, where he was slightly wounded, 26 November 1857, and the capture of Fort Birmah, being mentioned in despatches for his part in the latter.

Burke was promoted to Captain in September 1865 and in June 1866 he exchanged for the 18th Royal Irish Regiment.

Sold with photocopy papers and research. the medals with top buckle bars. 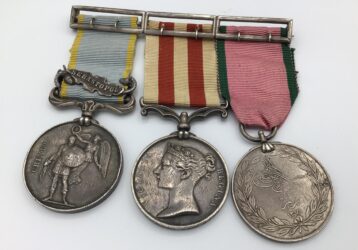