Presented by Nettlefolds (for Dancing) 35 x 23mm., silver, in cases of issue Victor Ronald Stanworth was born in King  Norton on 30 December 1916, the son of Walter and Ellen Stanworth. Enlisted into the King  Shropshire Light Infantry on 15 March 1940 and trained at the Infantry Training Centre at Ditherington. Served in the 5th Battalion on home defence duties. Discharged in February 1946. Post war he served as a Fire Officer with industrial fire brigades. He died in the Dudley area in 1987. 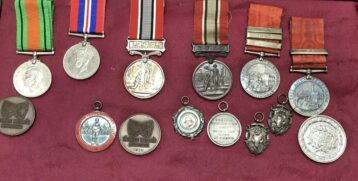