This meticulously researched book begins by describing the earliest known examples of the longbow, revealing that it was in use worldwide at least 8,000 years ago. With drama, vigour and enthusiasm,the author chronicles the arrival of the longbow in Britain, its curious temporary disappearance, its return and gradual adoption as the most important weapon in the English military arsenal, and its coming of age at the battles of Crecy, Poitiers and Agincourt. “Longbow” describes the archers themselves, where they came from, their equipment, training, uniform, way of life and terms of service; the fact and fiction of the Robin Hood legend; the reasons why the French never took to the weapon; the devastating effects of longbow against longbow in the Wars of the Roses; the eventual decline of the bow and Henry VIII’s campaign to maintain it. Also examined is the longbow as a sporting and hunting weapon, and its status in Britain today. There is a detailed account of how to make a longbow from scratch, including all the tools and materials required. Another bonus for the enthusiast is an important technical appendix written by three experts on the longbow – Henry Blyth of Reading University, Prof. P. L. Pratt of the Imperial College of Science and Technology, and Peter Jones of the Royal Armaments Research and Development Establishment. The chapter on the Mary Rose has been co-written with Prof. Pratt and Prof J. Levy, also of the Imperial College, and is the result of over ten years of study. “Longbow”, beautifully illustrated in both colour and black and white, is a compelling story and a major contribution to the history of archery. 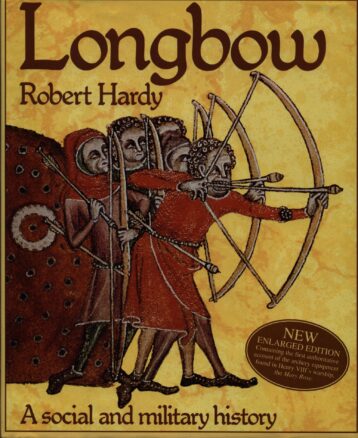