This medal, issued by the Natal Government, was awarded to those who took part in the operations against the Zulus in 1906.The medal itself is unusual in that the obverse head of Edward VII faces to the right instead of the left, the first medal to do so.The reverse design shows the figures of Natlaia and Britannia.Some 10,000 of these medals were issued, about 20,000 being without clasp.The Natal Government refused the help of the Imperial Government in putting down the rebellion, and thus the medal was only awarded to Colonial troops.The rebellion began in February 1906, when the Zulus refused to pay hut tax and murdered two policemen.The authorities acted quickly and arrested several chiefs, and fines were imposed.The threatened rising seemed to have been averted, but in April 1906 Bambata led a serious rising, and Greytown and Eshowe were besieged by the rebels.Troops were quickly raised in the Transvaal and Natal, and several columns entered Zululand, pursuing the rebels into the forest.By early July the revolt had been crushed and, as with the Riel Rebellion of 1885 in Canada, a colony had proved quite capable of defending itself without the use of Imperial troops.The medal was awarded to all those who served for twenty days or more during operations, whilst those who served for fifty days or more received the medal with clasp.This medal is named in thin block capitals to men and engraved in running script to officers.The ribbon is of crimson with black edges. Postage & Packing £2.00. Overseas please enquire. 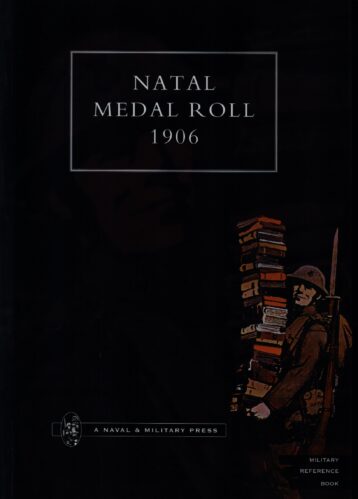