Without doubt the most sought after Army List of the Great War. Often referred to as the Armistice List, this compilation of over 3000 pages, fully corrected to 29 October, was the last List produced before the end of hostilities. The Armistice List, of value to all those who, for a number of reasons, have an interest in the Great War, has now been republished in three volumes and provides an important source of information relating to approximately a quarter of a million Officers who survived the Great War. A 902 page alphabetical nominal index lists some 250,000 Commissioned and Warrant Officers (Class I) on the Active List of the Regular Army, the Royal Marines, Special Reserve, the Territorial Force and the Reserve of Officers. Arranged by Regiment or Corps, and then by battalion or specialised unit, the Yeomanry and Territorial Cavalry; Guards; Regular, Reserve, Militia and Territorial Infantry, together with the Guards Machine Gun Regiment, the Household Battalion, the Machine Gun Corps and other unique Great War units. The contents also include the Cadet Corps, OTC units, Chaplains, Nursing Services, Channel Islands units, Colonial, Dominion and Empire forces, King’s African Rifles, West African Frontier Forces, West India Regiment, Bermuda Volunteer Defence Corps, the Somaliland Protectorate Force, various Indian Army listings, the Eastern Telegraph Reserve and much more. The wartime ‘economy printing’ of the original work has been enhanced by digital technology and, together with being a fully thread sewn production, this edition should provide a lifetime of useful service. 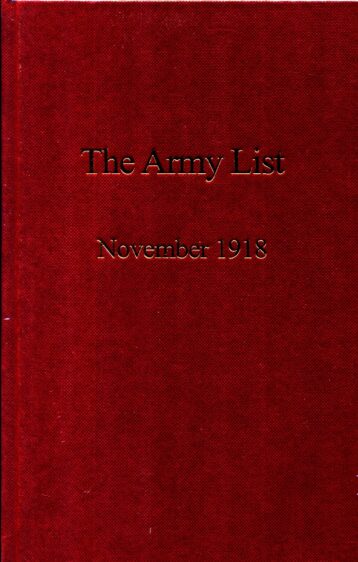