D.F.M. London Gazette 24 December 1940, the original recommendation states: Sergeant Coad successfully completed 33 operational flights over enemy territory with a total flying time of 203 hours; the last six were as Captain of aircraft. His coolness and skill as a Navigator/Bomb Aimer have largely contributed to the success of the operations in which he has taken part. He has consistently shown the utmost determination and courage in pressing home his attacks.Alan James Coad was born in May 1917, and was the son of Mr and Mrs R. J. Coad of Plymouth, and the husband of Mrs C. F. Coad of Newport, Wales. Coad was educated at Plymouth Public Central School, before becoming an Apprentice as part of the 26th Entry at R.A.F. Halton in September 1932. Having passed out from Halton in April 1935, Coad was posted to 13 Squadron, Odiham in August of the same year. Coad, trained as a fitter/rigger, was accepted for training as a pilot in October 1938. He carried out his initial training at 11 E.F.T.S., Perth and 9 F.T.S. Hullvington. Coad gained his Wings in July 1939, and advanced to Sergeant Pilot. He was posted as a pilot for operational flying with 50 Squadron (Hampdens) at Waddington, and by 25 October 1940 had flown in at least 33 sorties. The latter included: Fornebu aerodrome, Oslo, 30 April 1940, This aircraft carried out a successful bombing raid… Setting course from Skegness for Oslo, aircraft flew in fair weather at 10,000 feet. There was a slight haze. When some 100 miles from Norway, an enemy seaplane (Dornier 18) was observed formating on the tail with 4 landing lights on. The rear gunner fired three bursts at the enemy aircraft, and the landing lights were extinguished and the aircraft disappeared. Tracer appeared to enter the other aircraft. A landfall was made 30 miles west of Kristiansand, and skirting Kristiansand, aircraft proceeded straight to Oslo, which was identified by A/A guns and searchlights engaging an aircraft. 5 minutes later (at 0015 hours) our aircraft attacked the aerodrome of Fornebu, identified by hanger lights and a big fire burning, from 10,000 feet, flying from east to west. Six 250lb G.P. bombs (1 fused inst. and 5 time fused) were dropped and were seen to fall on the edge of the aerodrome. (Squadron Operations Record Book refers) Other operational sorties included to Binche; Sperkrade – Holten oil plant; Borkum seaplane base; Calais; Mannheim marshalling yards; and various Gardening and Nickel missions. Coad was posted to 16 O.T.U., Upper Heyford, 31 October 1940. He was killed 7 December 1940, while carrying out a night bombing practice flight, Hampden P. 4292 was seen flying low over Weston-on-the-Green landing ground. The Aircraft circled and permission to land was requested. While turning around the flare path at 300 feet, however, the aircraft rolled to the left and dived to the ground in an inverted position. The Aircraft was totally wrecked and the Pilot and Crew were all killed. An eye witness expressed the view that one of the engines failed before the crash, but this could not be confirmed.   Sergeant Coad is buried in St. Budeaux Churchyard Extension, Plymouth. Sold with the following documents: a number of photographic images of recipient in uniform, and copied research and memorial scroll. 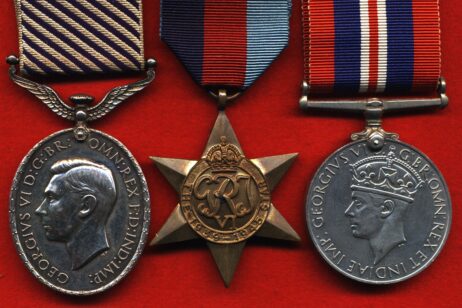