‘For conspicuous gallantry and devotion to duty whilst forward observing officer. Under heavy barrage he laid and maintained telephone wires across ‘No Man’s Land’ to the captured enemy trenches, and for several hours sent back valuable information to his battery.’

‘‘For conspicuous gallantry and devotion to duty when in charge of a battery, when pulling out of action with the enemy advancing very close up, one of his guns got knocked out, and could therefore not get away. He remained and blew it up by loading a shell in the bore as well as the breech and firing it rather than let it fall into enemy hands. His coolness on all occasions has kept up the confidence of all ranks.’

Sold with further details of his university and work 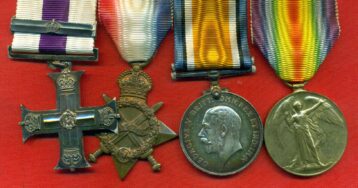