A rare award for Afghanistan

‘Mention has been made of the party under Lieut. G. H. Pratt which went forward on the 17 May carrying water and ammunition to the 1/35 Sikhs and to the 1/9 Gurkha Rifles. L/Cpl. Pike went forward with ammunition to the 1/35 Sikhs an advance of 2000 yards under heavy and accurate fire, he carried out his mission successfully, and finding a Lewis Gun out of action, repaired it and brought it into action where it did excellent work, later he volunteered to go down the hill and bring up water. He set a fine example of courage and devotion to duty.’

Harry John Pike, a native of Uffculme, Devon, served with the 2nd Battalion, Somerset Light Infantry in India during the Great War (sole entitlement confirmed as per MIC). Pike was subsequently serving with the Baluchistan Field Force when the Third Afghan War broke out in May 1919.

It was for his bravery during the action at Dakka on 17 May which he won his M.M., which included troops from the 1/9th Gurkha Rifles, 1/35th Sikhs and support from the King’s Dragoon Guards.

On that occasion a large force of some 2,000 Afghans, including 2 Cavalry units advanced to strike the British camp – they opened fire from the heights with rifles and artillery and put in a dangerous night attack at 9 p.m. which at one point threatened to overrun the defenders.

Having forged together, the British forces the next morning charged and forced the high ground, inflicting heavy casualties – some 300 dead – and sending the Afghan raiders into retreat. It was the efforts of the Somersets and individual efforts of bravery such as Pike which turned the tide of battle.

He would also subsequently add a ‘mention’ to his laurels ‘For distinguished service in operations against Afghanistan’ (London Gazette 3 August 1920) Provenance: Glendining’s, June 1994, Lot 262 and the late Jim Paul’s collection 2019. 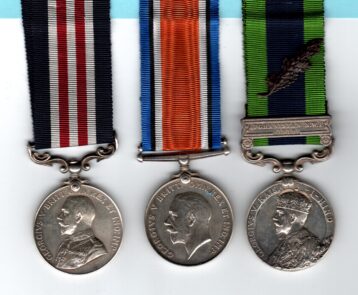