G.C.B. London Gazette 24.11.1882. Admiral Sir William Robert Mends was the eldest son of Admiral William Bowen Mends (1781-1864), and nephew of Sir Robert Mends. He was born at Plymouth on 27 February 1812. In May 1825 he entered the Royal Naval College at Portsmouth, and on passing out in December 1826 was shortly afterwards appointed to the Thetis, a 46-gun frigate, going out to the South American station. He was still in the Thetis when she was wrecked on Cape Frio on 5 Dec. 1830. It was Mends’s watch at the time the ship struck, but as the night was dark and thick and it was raining heavily, he was held guiltless, the blame falling entirely on the Captain and Master. Mends was considered to have behaved very well in a position extremely difficult for one so young and inexperienced, and several of the members of the court offered to take him with them.

After passing his examination he joined the Actaeon in the Mediterranean, which in 1832 was at Constantinople when a Russian army of upwards of twenty thousand men there, consequent on the terrible defeat of the Turks by Ibrahim Pasha at Konieh. The intervention of the Western Powers demanded the withdrawal of this force, and Mends was deeply interested in watching its embarkation, making careful notes of their manner and methods of embarking the cavalry and guns. Men, horses, and guns, with all their stores and baggage, were got on board within twelve hours, and Mends treasured up the experience for future use.

In the summer of 1834 the Actaeon returned to England and was paid off; and in January 1835 Mends was appointed to the Pique with Captain Henry John Rous. In July the ship was sent out to Canada, and on the homeward voyage, on 22 Sept., struck heavily on a reef off the coast of Labrador. After several anxious hours she was got off, and, though she was much damaged and was leaking badly, and her main and mizen masts were badly sprung, Rous determined to proceed. Five days later her rudder, which had also been injured, was carried away, and the ship left helpless in a heavy westerly gale. With admirable seamanship she was steered for several days by means of a weighted hemp cable towed astern and controlled by a spar lashed across the ship’s stern. It was not until the 6th October that they were able to ship a jury rudder; and on the 13th they anchored at St. Helen’s after a voyage that has no parallel in the annals of the nineteenth century. Mends then learnt that he had been promoted to the rank of Lieutenant on 11th August.In December he was sent out to join the Vernon at Malta.

A year later he was moved into the Caledonia and then to the Rodney. In July 1838, he went to be Flag-lieutenant of Sir John Louis, the second in command on the station and superintendent of Malta dockyard. He continued with Louis, sometimes afloat, but mostly at Malta, until July 1843. From November 1843 he was in the Fox frigate with Sir Henry Blackwood on the coast of Ireland and in the East Indies when on the 2nd January 1847, he received the news of his promotion, on 9 Nov. 1846, to be Commander. In January 1848 he was appointed to the Vanguard, in which, a couple of months later, he had the misfortune to lose some of the fingers of his left hand, which was carried into a block and badly crushed. It was this, more than the loss of the fingers, which caused trouble; and for years afterwards he suffered from severe attacks of neuralgia. The Vanguard went home and was paid off in March 1849. In July 1850 Mends was appointed to the Vengeance, again with Blackwood who died after a short illness at Portsmouth on 7 Jan. 1851 and was succeeded by Lord Edward Russell. Towards the end of the summer the Vengeance went to the Mediterranean, but came home in December 1852, when, on 10 Dec., Mends was advanced to post rank in acknowledgment of the excellent order the ship was in.

In October 1853 he was selected by Sir Edmund (afterwards Lord) Lyons to be his Flag-captain in the Mediterranean, if Captain Symonds, then in the Arethusa, should prefer to remain in the frigate. If Symonds should prefer to join Lyons, it was understood that Mends should have the Arethusa, Mends accordingly took the Agamemnon out and joined the fleet in the Sea of Marmora on Christmas Eve, when, as previously arranged, he took command of the Arethusa. In her he took a particularly brilliant part in the bombardment of Odessa on 22 April 1854; ‘we stood in twice,’ Mends, wrote, ‘tacked close off the Mole and engaged the works on it in reverse . . . pouring in a destructive fire as we went about.’ He was promptly recalled by the Commander-in-Chief, who seems to have considered that he was needlessly risking the ship. ‘I expected a reprimand when I went on board the Admiral to report, but the enthusiasm of the fleet and the cheers given to us as we passed along the lines mollified the chief, and I was simply told not to go in again.’ The French officers who had witnessed the manoeuvre called on Mends to compliment him on it; and many years afterwards a French writer in the ‘Revue des Deux Mondes’ referred to it as a brilliant tour de force. In June Lyons and Symonds had found that they did not get on well together, and it was proposed to Mends to re-exchange into the Agamemnon, which he did.

From that time his individuality is lost in that of the Admiral, except that, as chief of Lyons’s staff, he had the direction of many points of detail on which much depended. By far the most important of these were the embarkation of the troops at Varna and the subsequent landing of them in the Crimea on 14 Sept. The whole thing was admirably done without a hitch and without loss; and though, to the world at large, it appeared to be done by Lyons, Lyons himself and the navy fully recognised that the credit belonged to Mends.

In February 1855 Lyons moved his flag to the Royal Albert, Mends accompanying him. In all the operations of the year he had his full share; he was nominated a C.B. on 5 July, and in December was ordered to take the ship to Malta, the Admiral remaining in the Black Sea with his flag in the Caradoc. While crossing the Sea of Marmora the stern-gland the metal bearing of the screw-shaft as it passes through the stern-post gave way, and an alarming rush of water followed. During the next day the ship pursued her voyage, the engines pumping the water out, but on 28 December Mends decided that it was necessary to beach the ship, which was cleverly done in Port Nicolo, in the island of Zea. There a cofferdam was built inside round the hole, and, the ship’s safety being thus secured, she proceeded to Malta under sail, and arrived there on 7 Jan. 1856.

Mends continued in command of the Royal Albert till March 1857, when he was appointed to the Hastings, guard ship in the Mersey, from which, four years later, he was appointed Deputy-Controller-General of the Coastguard at the Admiralty. He held this office for about a year. In May 1862 was appointed Director of Transports, with the duty of organising and administering the transport department of the Admiralty. Here he remained for more than twenty years, during which period there were several exceptional calls on his office, which were answered in a manner that testified to the thorough working order in which things were kept.

Sold with an archive of letters, drawings, Naval Orders and Maps, and other items relating to Admiral Mends and family, with much emphasis on his time in the Crimea, together with a watercolour by Lieutenant G P Mends of the Burning of the US Steam frigate Missouri at Gibraltar, signed, inscribed and dated August 26th 1843, and a copy of the Life of Sir W. R. Mends, G.C.B. Numerous photos of his wife Matilda and his son B.S. Mends who compiled the book on his father, taken from his journals and letters. The copy of the book is leather-bound and inscribed B.S.M and Ex Libris notes, presented to Evelyn St. Austin mends 1937. 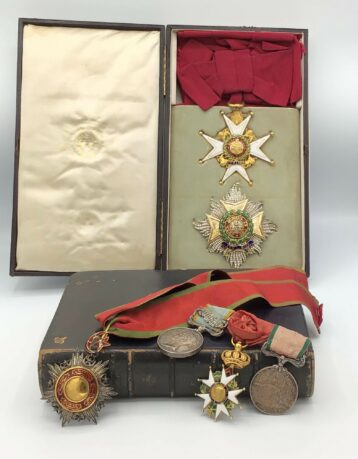