John Angove Topp was born in Durban, Natal, on 23 February 1924, the son of Major Percy Topp, and the younger brother of Kenneth Topp, and was commissioned Second Lieutenant in the South African Air Force on 19 February 1944. He was promoted Lieutenant on 19 August 1944, and served during the Second World War with No. 11 Squadron in Italy, based at Pontedera. He carried out 72 Operational Sorties during the period 4 November 1944 to 19 April 1945, and was killed in action on 19 April 1945 when, on his 72nd Sortie, carrying out an armed recce south of the River Po, his Kittyhawk was shot down by anti-aircraft fire. He is buried in Argenta Gap War Cemetery, Italy. Sold with a photographic image of the recipient, copied record of service, and the recipients two Pilots Flying Log Books, which give very detailed accounts as to all the operational sorties that the recipient carried out- two typical entries read: 3 April 1945: Bombed Gestapo Headquarters through cloud, using Radar System. Set out to do Armed Recce but there was 10/10 clouds covering whole operational area. We then called up Auntie (Radar Station). Auntie instructed us to fly at 14,000 feet, gave us a course to steer, and told us when to release the bombs, and we scored a direct hit on the Gestapo Headquarters.9 April 1945: Bombed Occupied Buildings in Town of Lugo. Very close support to the Eighth Army. 1,000 yards for troops. This was a special show. This wing (8 Wing) sent in 40 aircraft (12 Kitties and 28 Spits). When we arrived at the target area we found it covered in battle dust which rose to a height of 5,000 feet. Never before have I seen so many aircraft crammed in such a small area, at least 100 aircraft. Our bombing was excellent, all bombs landed in target area. There was moderate accurate light A.A. fire. The artillery barrage that the Eighth Army put up was most impressive from the air. Later that afternoon they took Lugo and the push began. Mounted for wear. 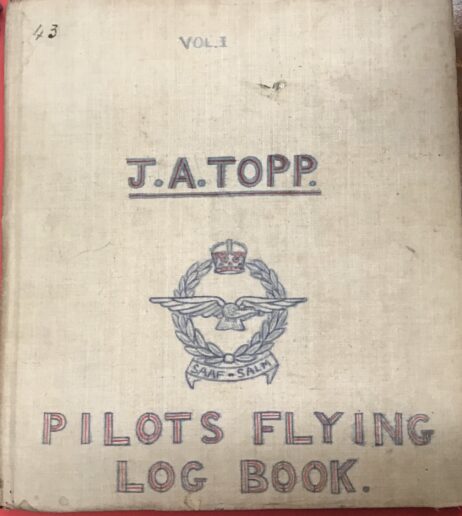