One of just 71 Medals awarded to men of the A.S.C., only ten of them being entitled to the Coomassie clasp.

Robert John Lapham, who was born in April 1847, served in the ranks for over 17 years before being commissioned as a Sub. Assistant Commissary in March 1878. He is confirmed on the Ashantee Medal roll, which lists him as 1072 2nd Class Staff Sergeant, and notes that he came under fire with convoy when attacked on 1/2/74 between Fommanah and Ahkankuassie. Leigh Maxwells The Ashanti Ring makes reference to this action, which occurred as Wolesley prepared to advance from Amoaful: Colley had gone back to Ahkankuassie on 1 February [1874], as soon as he knew of the Generals plans to advance and as the General left Amoaful, so he departed for Fommaneh. When he got there he had to find a way through an Ashanti force which had the base surrounded and was attacking it from all sides. The town was far too big to be held by its small garrison of forty West Indians and a hundred of Russells Mumford Company, so the sick from the hospital were removed to a stockade at the north end of the town and the neighbouring houses were pulled down to give a field of fire. The attacks stopped at one oclock in the afternoon, but the carriers had been so frightened by the ferocity of the assault that they were in shock, and it proved impossible to move them for some days, a most unfortunate thing to happen at this crucial stage of the war. In fact, the first proper convoy to go up the line was of Royal Navy Kroomen who reached Aggemmamu on 6 February.

Lapham, who latterly held the appointment of Quarter-Master on the Commissariat and Transport Staff, also participated in the Transvaal Campaign of 1881, and was granted the honorary rank of Captain in March 1888. Sold with research including copy of the medal roll and several extracts from the regimental Journal in which he is mentioned. 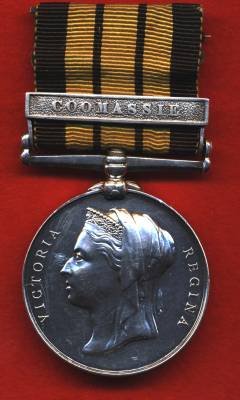