Modelled upon a Dresden porcelain statuette, circa 1817, held in the collection of the Regimental Museum of the Queen’s Royal Lancers

John Rattenbury Skeaping RA, was born on 9 June 1901, the eldest son of the painter Kenneth Mathieson Skeaping. He studied at Goldsmith’s College, the Central School of Arts and Crafts (1917-19) and the Royal Academy until 1920. In 1924 he won the British Prix de Rome and its scholarship to the British School at Rome. Whilst in Rome he married sculptor Barbara Hepworth, the couple putting on a joint exhibition in 1928 at the Alex Reid and Lefevre Gallery in Glasgow. Having been divorced in 1933, during the Second World War he worked for the War Artists’ Advisory Committee, being elected to the Royal Academy in 1960. Skeaping is perhaps best known for his equine painting and sculptures, besides designing for Wedgewood. He died on 5 March 1980. 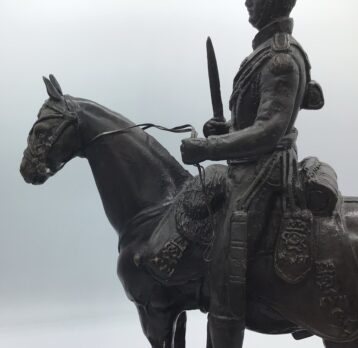