Robert Dashwood Fowler was born on 29 April 1814, the eldest son of Rear-Admiral R. M. Fowler. This officer entered the Royal Naval College in December 1826, and embarked, in December 1828, on board the Champion 18, Captains George Scott and Francis Vere Cotton, employed off the coast of Africa. From 1830 until 1834 he officiated as Midshipman and Mate, on the North American and Mediterranean stations, of the Winchester 52, flag-ship of Sir Edward Griffith Colpoys, North Star 28, Captain Lord William Paget, Belvidera 42, Captain Hon. Richard Saunders Dundas, and Rainbow 28, Captain Sir John Franklin. In the latter ship, during the revolutionary movements of 1832, he appears to have been present at Mesolonghi, and also at Patras, which city, in company with the French forces, he assisted in garrisoning. On 2 January 1837, after a continued servitude in the Mediterranean, as Signal-Mate of the Portland 52, Captain David Price, he was promoted to the rank of Lieutenant, and towards the close of the same year he sailed for the Cape of Good Hope in the Melville 74, Captain Hon. R. S. Dundas, bearing the flag of Hon. George Elliot. On eventually proceeding to China, Mr. Fowler assisted at the capture, in 1841, of Chuenpee and Tycocktow, co-operated likewise in the attack upon the forts of the Boca Tigris, and commanded the ship’s  pinnace in the first advance up the Canton River, where all the forts and batteries as high as Howquas Folly were captured and destroyed. His next appointments were  22 February 1842, to the Formidable 84, flag-ship of Sir Edward W. C. R. Owen, in the Mediterranean 7 November 1845, to the St. Vincent 120, flag-ship at Portsmouth of Sir Charles Ogle and 30 April, 1846, to the Queen 110, as Flag-Lieutenant, in the Channel, to Sir Gordon Bremer. He was promoted to the rank of Commander on 9 November 1846, and to Retired Captain on 1 July 1864. 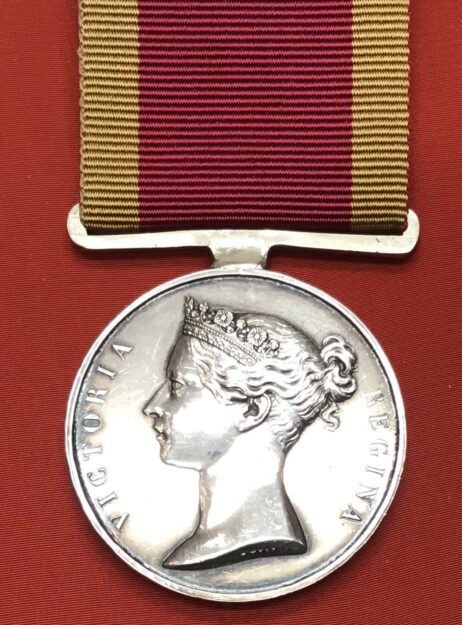