He saw active service with the 69th in the campaign in Travancore, India, in 1809, as related in the regimental history: Colonel St Leger advanced along the road from Palamcottah arriving before the Arambooly Lines on 6th February. Being unprovided with a battering train the Colonel determined to effect a surprise against the redoubt on the hill at the southern extremity of the works. During the night of the 9th the escalading party moved silently towards this point. This party was made up of two companies and the picquets of the 69th, 150 in all, under Captain W. Symes (the other officers being Captains H. Lindsay and A. N. Cunningham, Lieutenants R. Carey, J. Reed, L. Baby, and A. D. Baby), nine companies of Native Infantry, with a party of pioneers carrying scaling ladders; Major Welsh of the 3rd Native Infantry was in command. During the early morning of the 10th, a party of the 69th climbed the steep face of the mountain and after six hours arduous ascent through almost impenetrable jungle reached the foot of the redoubt undiscovered by the enemy, another company of the 69th and three of Native Infantry moving up in support. The ladders were quickly placed against the wall; the garrison being taken by surprise made a feeble resistance; the redoubt was carried with trifling loss, and its guns turned to enfilade the lines below. By eight o clock in the morning the whole chain of works, including the arsenal, had been stormed in several places, the north flanking redoubt also carried, and the Travancoreans, hastily abandoning the rugged mountains, fell back into the open country at the further end of the pass.

Mention is next made of Lindsay at the capture of Java and the action at Weltervreeden in 1811: Gillespie decided to attack in two columns, but on finding the ground unsuitable for this, he brought up two guns to deal with the enemys four, sent his skirmishers into the pepper plantation, and deployed both his columns. This evolution was answered by a tremendous fore from the whole of the enemy line. Finding the ground too intricate to advance in line he ordered Major Butler of the 89th to take the battery in flank. This was gallantly and successfully done, when the whole of Gillespies Division poured by companies, and even sections, through thick jungle after the retreating enemy, the Light Company of the 69th heading the pursuit.

The advance was carried so far as to come under the fire of the entrenched camp of Cornelis. As strong reinforcements were coming out of the camp Auchmuty put a stop to Gillespies further advance and brought up Wetheralls Division in support. Gillespie in his account of this affair specially mentions Captain H. Lindsay, commanding the Light Company of the 69th. Gillespie was afterwards entrusted with the principal attack on Fort Cornelis, on which occasion Captain Lindsay again commanded the Light Company.At Quatre Bras, Sir Colin Halkett himself then rode forward to the stream to observe the French positions. From there he saw Kellerman with his cavalry preparing to advance and the French artillery re-opening fire. So he sent his A.D.C. back to Colonel Morice ordering him to form square since a cavalry attack was to be expected, whilst he himself galloped back to the rest of the brigade and gave similar orders.

A few minutes later, whilst the regiment was in the process of forming square, the Prince of Orange galloped up and asked the Colonel in a loud voice what was the object of his movement. I am forming square Colonel Morice replied, to resist cavalry. There are none coming, deploy at once into line,replied the Prince. The order had to be obeyed; but at that very moment the French artillery fire died away into an ominous silence as Kellerman at the head of the 8th and 11th Cuirassiers, 800 strong, crossed the stream and advanced through the tall rye. The regiment had by then its three right Companies (Grenadiers, Nos. 1 and 2) in line with the 8th company covering the deployment, the remaining companies being in process of formation.

The muffled thunder of hoofs was heard amongst the rye. The steel-clad horsemen, headed by Kellerman, having failed to break the 33rd then in square, seeing the 69th in a hollow below, wheeled round and charged down upon them. The Regiment made shift to throw itself into square, and apparently, would have succeeded had not the Captain (Lindsay) of the grenadier company wheeled the two right hand companies about in order to fire, instead of closing square. The companies actually in position did partially check the charge by a sharp discharge of musketry. The two companies were destroyed and the rest were partly broken. The remainder of the Regiment saved themselves by taking refuge under the bayonets of the 42nd and 44th of Packs Brigade. Kellerman, continuing his career, charged the 30th, who, having had time to form square, beat the cavalry off…. in the midst of the confusion thus created [the enemy] captured and carried off one of the Colours, in defence of which Major Lindsay, Lieutenant Pigot, and Volunteer Clarke highly distinguished themselves and were desperately wounded.

In respect of his wounds received at Quatre Bras, Major Lindsay was granted a pension of £100 per annum. He retired on half-pay in December 1819 and his name disappeared from the Army List after 1827. 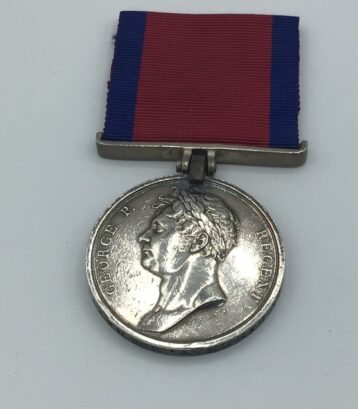