Glory is no Compensation, The Border Regiment at Gallipolli, 1915.

In this compelling and meticulously researched chronicle, using the first hand accounts of men who were there, Ralph May describes the background to the 1st and 6th (Service) Battalions The Border Regiment from 1907 to 1914 in Gibraltar, India and Burma, followed by their fortunes throughout the Gallipoli Campaign. The conditions under which these soldiers lived and fought are graphically described with extracts from diaries, letters and official documents. They suffered terrible casualties, were never out of range of the Turkish guns and endured the extremes of heat and cold and the unsanitary conditions of the front line. Yet morale and disipline were maintained throughout. The text is supported by maps and many contemporary photographs, as well as views of the battlefield today, together with detailed appendices listing more than 3,000 Officers, NCOs and Soldiers who served with the two Battalions during the campaign, together with casualty and other biographical information, honours and awards. Gallipoli was a tragedy on a classical scale, but this in no way takes away the glory that was due to the soldiers who fought in appalling conditions, carring out the orders of Generals with no imagination, suffering horrifying casualties, and sticking it out to the end. Gallipoli was a proud campaign in the history of the Border Regiment. 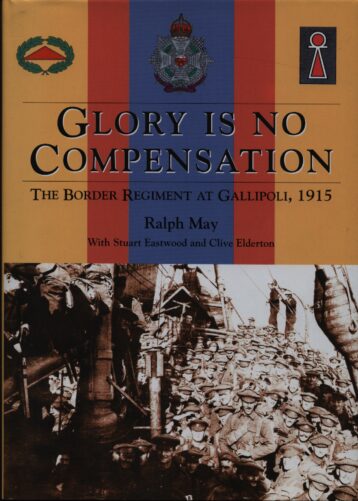 You're viewing: Glory is no Compensation, The Border Regiment at Gallipolli, 1915. £15.00
Add to basket