Honour The Navies. Honours and Awards to the British and Domininion Navies during WW11

Honour the Navies lists the names of over 26,000 recipients, of gallantry and distinguished service awards made to members of the British and Dominion Navies during the Second World War. Also listed is their service number, rank, which honour was awarded, the London Gazette reference, the navy with which they served and the theatre of war in which the award was won. These entries are listed in alphabetical order enabling the reader to see all of an individuals Second World War awards in one place. Each award is described in a separate chapter, which shows the date of the awards creation, the reasons for which the award is made, a description of the insignia of the award, its ribbon, postnominals and the number of awards made.This is a fascinating book for anyone interested in Second World War or any collector, military enthusiast or family historian.Post and Packing UK £8.00, overseas please enquire. 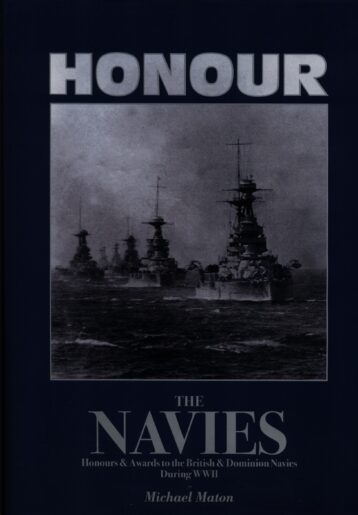 You're viewing: Honour The Navies. Honours and Awards to the British and Domininion Navies during WW11 £75.00
Add to basket